Welcome to THE MAKING OF A NATION – American history in VOA Special English. I'm Steve Ember. "I want to say to you, for the next four years, there'll be a Democrat in the White House, and you're looking at him." Presidential elections are exciting events in American politics. Few elections for the White House have been as exciting as the one in nineteen forty-eight. And few have had such surprising results. "This is NBC Television." "We have obtained the results from the state of Ohio which assures victory for President Truman and Senator Barkley. With Ohio's twenty-five electoral votes, President Truman and Senator Barkley will have a total of two hundred and sixty-six votes in the Electoral College. This is the minimum figure necessary for victory." Four candidates were nominated for president in the nineteen forty-eight election. One was the man already in the White House, the candidate of the Democratic Party, President Harry S. Truman.

Truman had been the party's vice presidential candidate with Franklin Roosevelt in nineteen forty-four. When Roosevelt died a year later, Truman became president. He was the one who made the decision to drop atomic bombs on Japan to end World War Two. But Truman did not do well during his first few months in office. He made several serious mistakes. He had trouble with the economy and organized labor. His party lost control of the Senate and the House of Representatives in the congressional elections of nineteen forty-six. Most Americans had little faith in Truman's ability as a leader. They expected that he would lose the presidential election in nineteen forty-eight if he chose to be a candidate. President Truman did choose to run. He took several strong steps to show his leadership in the months following the Democratic defeat in the congressional elections. Truman called on Congress to pass a number of laws to help black people. He took firm actions in his foreign policy toward the Soviet Union. These included the Marshall Plan and the Berlin Airlift, as we discussed in our last two programs. And he began to speak out with much more strength to the American people.

Truman succeeded in winning the presidential nomination of the Democratic Party. He chose Alben Barkley, a senator from Alabama, for vice president. "Senator Barkley and I will win this election and make these Republicans like it -- don't you forget that!" Truman declared in accepting the nomination. The Republicans nominated New York State Governor Thomas Dewey. Dewey was a wise and courageous man. He was also very serious. Truman campaigned by telling the voters that Dewey did not understand the needs of the average American. He called Dewey a candidate of rich people. One day, Dewey got angry at a railroad engineer because his campaign train was late for a speech. Truman said this proved that Dewey did not understand the problems of railroad engineers and other working Americans. He tried to make the election a choice between hard-working Democrats and rich Republicans. Two other men also were candidates for the presidency. Both were from newly created parties. One was Strom Thurmond from South Carolina. He was the candidate of the States Rights Democratic Party, also known as the Dixiecrat Party. Most of his supporters were white people from the southeastern part of the country. They opposed giving full rights to black people. The other candidate was Henry Wallace of the Progressive Party. His supporters believed that Truman had turned away from the progressive ideas of Franklin Roosevelt.

Both Thurmond and Wallace had broken away from the Democratic Party. Most political experts believed these two candidates would take votes away from President Truman. They believed the Republican Dewey would surely win the election. President Truman did not have strong public support. But Harry Truman was a fighter. He did not believe the election was lost. He took his campaign to the American people. "On Election Day, the president, the Congress, the governor, the mayor all cease as the government. You are the government, because then you decide what sort of government you want. And when you do like you did in nineteen forty-six, when two-thirds of you stayed at home, you get just what you deserve -- you got that good for nothing Eightieth Congress." He said he had always campaigned by going around talking to people and meeting them. Running for president was no different, he said. He just got on a train and started across the country to tell people what was going on. He wanted to talk to them face to face. When you stand there in front of them and talk to them, he said, the people can tell whether you are telling them the facts or not. "If you give the Republicans complete control of this government, you might just as well turn it over to the special interests, and we'll start on a boom-and-bust cycle and try to go through just what we did in the twenties and end up with a crash, which in the long run will do nobody any good but the communists." Truman campaigned with great energy. 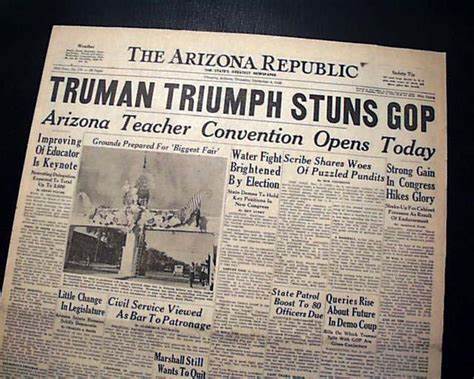 He made hundreds of speeches as his train crossed the country. It became known as the "whistle stop" campaign, because it stopped at some of the smallest towns and villages in the country. Truman gave speeches from the back of his campaign train, the Ferdinand Magellan. He spoke to farmers in Iowa. He visited a children's home in Texas. And he discussed issues with small groups of people who came to visit his train when it stopped in rural areas of Montana and Idaho. Dewey and the Republicans laughed at Truman's campaign. They said it showed that Truman needed votes so badly that he had to spend his time looking for them in small villages. Truman said the criticism proved that Republicans did not care for the average American. Dewey also campaigned across the country by train. But he showed little of the fire and emotion in his speeches that made Truman's campaign so exciting. Dewey's speeches were "safe." One reporter wrote that Dewey was acting like a man who had already been elected and was only passing time, waiting to take office. Dewey had good reasons to feel so sure of being elected. Almost every political expert in the country said Truman had no chance to win. The Wall Street Journal, for example, printed a story about what Dewey would do in the White House after the election. And the New York Times said that Dewey would win the election by a large majority.

Truman refused to accept these views. Instead, he spoke with more and more emotion against Dewey. Most Americans still believed that Truman would lose. But they liked his courage in fighting until the end. One supporter shouted "Give 'em hell, Harry!" -- "them" being the Republicans. Soon supporters across the country were shouting "Give 'em hell, Harry!" Truman made special appeals to working people, Jews, blacks, Catholics and other traditional supporters of the Democratic Party. In his final radio speech before the election, he promised to work for peace and a government that would help all people. Then he went to his home in the state of Missouri to wait with the rest of the country for the election results. Republicans across the country greeted Election Day happily. They were sure that this was the day that the people would choose to send a Republican back to the White House after sixteen years. Some of the early voting results from the northeastern states showed Truman winning. But few Republicans worried. They were sure Dewey would be the winner when all the votes were counted.

The Chicago Tribune was also sure who the next president would be, declaring in a huge headline "Dewey Defeats Truman." But the newspaper was wrong. Everyone was wrong. Everyone, that is, except Harry Truman and the Americans who gave him their votes. Truman went to bed on election night before all the votes were counted. He told his assistant that he would win. He awoke early the next morning to learn that he was right. Not only did he defeat Dewey, as he thought he would, but he won by a good number of votes. And he helped many Democratic congressional candidates win as well. The Democrats captured both houses of Congress. After the results were announced, as heard in this old recording Truman showed his sense of humor by joking about the predictions of his defeat.

"I had on the National Broadcasting Company and Kaltenborn was saying ‘While the president is a million votes ahead in the popular vote, we have yet to hear from, and we are very sure that when the country votes come in, Mr. Truman will be defeated by an overwhelming majority.' And I went back to bed and went to sleep." Harry Truman would make many difficult decisions as America moved into the second half of the twentieth century. Truman would send American troops to help the United Nations defend South Korea against aggression from the North. He would join other Western leaders in establishing a new alliance, the North Atlantic Treaty Organization. They established NATO to provide for the joint defense of Europe and North America. Truman and later presidents would make decisions to send large amounts of economic and military aid to countries around the world. Many of these decisions were necessary because of America's new responsibilities after World War Two as leader of the Western world.