COVID-19, of course, wreaking havoc on the world's economy, but is that the only reason that Yemen is not receiving as much funding at this particular time?

I think the main issue that we're facing right now Yemen has to do with the weaponization of age, where the international community is in a very difficult position, where it has to try to mitigate the risk of handing out aid. And as I mentioned before, risking for certain factions to be using that to actually weaponize their agendas and actually assert pressure onto a certain demographic to further their political agenda. And the fact that they also have to make sure that the age is actually going to the right people as opposed to again falling into the hands of various armed militias in Yemen, which would not be helping the people for actually enabling essentially those factions who seek to destabilize Yemen even further.

So it's a very difficult position to be and it has been very very much politicized. And I think that a lot of the time this has been used by the media to kind of inflame passions and make the public side automatically. You know with certain factions within Yemen arguing that the world is standing by one people in Yemen are suffering. Yes, they are suffering. I think it's a little bit more complicated than just you know grandstanding on morality and politics.

And actually understand that the situation is still very very complicated that is not just a simple case of handing out aid or issuing checks to Yemen.

We need to make sure that communities are protected that people's right are respected that they are being helped truly and not simply that we know simply putting a band aid on things and just throwing our aid to the country without checking that is actually going to the right people the right demographic.

And actually doing some good in elevating poverty and helping people in their in a true way, in a meaningful way. And I think that this is the same thing with COVID-19 as well is that not only are we facing risk for people handing out humanitarian aid that we need to think about their protection as well. Now the issue has been compounded by this pandemic.

And it has become you know even more difficult to try to help people in Yemen. it's not the case of people are just standing by watching Yemen disappear. I think it's a more complicated than that. And we need to understand that factions in Yemen have a hand in this and in making it about humanitarian issue to further the political agenda. And they have no interest whatsoever in actually assisting the international community in creating humanitarian corridor in making sure that aid is being transferred to the right people, and that it's being organized in a fair manner in the correct manner. So it's a very complicated problem. It's not just a monetary issue, is not about people not caring. It's about doing the right thing in the right way. 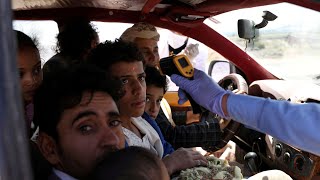